OK, so today is Saturday 8th June. It’s very early 6-47 a.m. but our body clocks are still shot. But assuming we are about to lose the wi-fi just a quick few words to get us as up to date as we can be.

Waiting for the taxi from the hotel to the airport, yesterday; two interesting events. One was a waitress appearing, looking anxious,  who had served us at breakfast still hunting for the person in the next booth to us who hadn’t paid. I was mid poached egg (again!) when I realised our waitress had summoned a fellow employee and was pointing at the table, “She just left without paying the bill.” Not quite sure how this would help the Columbo look a like but the evidence was there somewhere, I guess. Anyway outside the hotel she scanned the waiting taxi queue for her suspect and went back inside muttering, “She didn’t pay the bill.” Two folk who got into a taxi, with cases travelled all of ten yards, the taxi stopped, they got out and removed their cases and then the taxi drove off and they just stood there. Your mind races at times like these (well mine does) as to what might have happened. Did they argue about a pre fixed price, were they in the wrong taxi or had they simply both broken wind simultaneously and really got up the drivers nose? We shall never know. 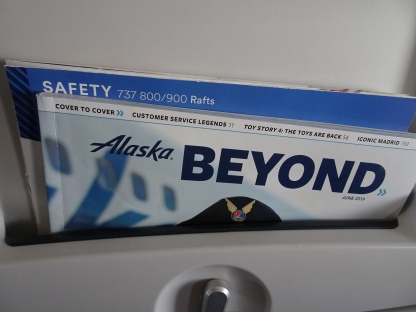 Lunch consisted for me, of one hi-fi bar, a bag of nuts and a cocktail on the plane. We landed and then onto the ferry and then the hotel shuttle, strangely enough to the hotel.

Why that picture of the two of us above is SO big, I have no idea! A stroll round before dinner, which we ate very early because, of course, having gained an hour by seven which was now really six, and not actually had lunch; we were really quite hungry.

As we came into land we realised, Graham and Helena, this place is obviously frequented by the big cruise folk! But to our delight we spotted our visit Bald Eagle and our first float plane. 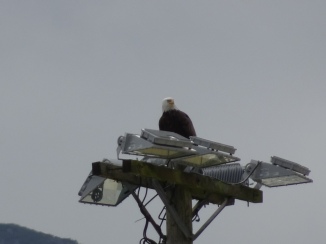 Then came my biggest meal mistake so far. Mary plumbed for the Penne but I went for the fried chicken. I didn’t realise it was going to come in such heavy batter; light tempura batter it was not. And the vegetables were swimming in a very, very garlicky sauce. I couldn’t actually cut the batter with my knife, so resorted to biting through it, at a huge risk to my teeth, and then peeling the batter off by hand, to get to the chicken. Rick Stein, I contemplated would have been off into the kitchen and got the recipe in order to take it back to the UK and use the amazing mixture to fill in all the potholes. The vegetables went back and fresh ones returned without garlic but by that time I had almost finished my grueling quarry work.

As you can see the batter left when I had finished was almost the same as when I started out. We live and learn. Mary had tea; no where quite understands tea like the English we decided. And I’ll also leave you with a pretty flower picture but we can’t find it in our guide. 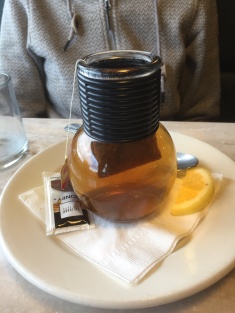 When Mary had said, “I’ll have a tea, please,” the waitress immediately responded with, “Hot?” No bring it on lukewarm if you want; it is a different culture, for sure. And sitting there eating we both felt we were in some American movie, with all the faces surrounding us, straight from Central Casting; all gazing at four huge television screens, all showing four completely different channels. Mind blowing? Oh, yes.

Till the next time whenever that may be, thank you for reading.

Malcolm worked for LWT. Mary worked for TRL. They live near Camberley in Surrey and did achieve their life long ambition to visit New Zealand. They have two daughters Laura and Hannah and two grandchildren Zach & Safi. Having done the big trip they then went to Canada, which was amazing. Scroll down it’s all here. They have visited Venice that they both so fell in love with in 2009 again. And recently returned to Lefkada for one week in glorious sunshine. Where next? Well, Canada is calling again in 2019; this time including Alaska. So stay tuned if you enjoy the ups and downs of travelling. View all posts by Malcolm and Mary

7 thoughts on “What I forgot to say about yesterday. Friday.”